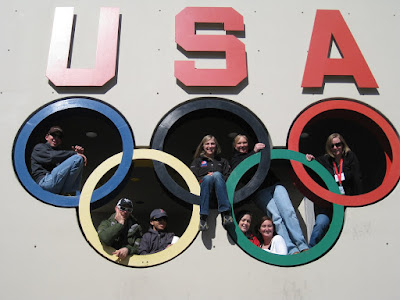 Well, this picture can sum up the past weekend, minus a few other events which I will reveal. If you aren't entirely sure what you are looking at I'll fill you in...It's the Olympic circles obviously at the Olympic Training Center in Colorado Springs. There are many more photos (same naughty, some nice) on my picture website (http://picasaweb.google.com/aldsmith3)

We were at the Olympic Training Center (OTC) for the Rocky Mountain American College of Sports Medicine conference. The ACSM is a governing/educating body for us in the Sports Science field and many times the position stands our government adopts on exercise comes directly from them. The Rocky Mountain is just a more local extension of a national group. Back home in PA it was the Mid-Atlantic ACSM.

In addition to attending lectures and hearing various people talk, myself and 2 other students went mountain bike riding at Palmer Park in CO Springs. It is a very rocky and beautiful area just northeast of the OTC. Plus it was nice to have a chance to do some outdoor activity without snow impeding our fun. Anyways, some of the lectures/speakers...one was from a guy who had run across America (from San Francisco to New York City) in 51 days! When free from injury, he was averaging 60-70 miles a day! He'd sleep about 4 hours a night and do it again. What an experience! The other notable speaker was a Medical Doctor who is one of the doctor's in the medical tent for the Ironman triathlon in Hawaii. He has been doing such for a number of years now. His spiel was about hydration, more so along the lines of not only being hydrated, but having the correct sodium (salt) balance. Often times, endurance athletes are hydrated but they are hyponatrimic (low salt). Words of wisdom to those of you planning any intense outdoor sessions where you'll be sweating in the heat...get your fluids and make sure there is some sort of sodium content in them (i.e. Gatorade, etc), but don't overdue it. Secondly/lastly, he also spoke about prevention of heatstroke. If you remember the Minnesota Vikings football player Cory Stringer, who died a few years ago from heatstroke. Often times, the mistake medical personal/trainers/coaches make is to call the ambulance when in essence you can save someone from dying from heatstroke by simply immersing them in an ice bath. 9 times out of 10, cold fluids or even an IV to boost hydration/speed cooling will not work and a simple ice bath will save them. He referenced 2 amateur runners in the Marine Corps Marathon (Washington, DC) where 1 died and 1 lived. The 1 runner who was put into an ambulance and sent to the hospital ended up dying b/c their core body temperature was too high and the life-saving steps to bring it down weren't taken; where as the other runner who suffered from heatstroke was put into an ice bath at the medical tent and lived to run another day. The simple lessons...Rob, this is for you.

Anyways, I didn't mean to write so much about that last deal, but it obviously meant something to me and in ways you can pass it on for those of you that find yourselves running/exercising in more extreme conditions.

In other news, I am currently applying for a job personal training at the country club up at Crested Butte. They currently do not have any or many male personal trainers and are in need. I wouldn't probably start until May and the club is undergoing an extensive make-over so I have hope of being able to work there. A non-traditional student (40 some year old mother) works there now and she put in a good word for me. I'll keep you updated on that.

Hertz Rent A Car continues to go well. I make almost as much money there in a month as I do with my job here at the college, so it's nice to have a 2nd income. Gotta crawl out of the debt hole somehow! haha.

Hope you all are well, I hear from bits and pieces of you and quite frankly, I'm not sure everyone who is signed up for this blog even reads it anymore, so for those of you that read it, thank you!! Take care, be well, and don't forget to smile.

Alan
at 11:59 AM
Email ThisBlogThis!Share to TwitterShare to FacebookShare to Pinterest
Labels: Day/Weekend Trips, Fun in CO, Job Stuff

Thanks for your thoughts. Unfortunately, I'm on the receiving end. No ice in the ambulance yet but cold (4 degree celcius) fluid I can do (many give room temp 28 degree celcius fluid)