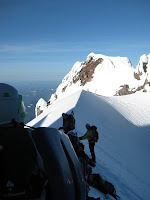 I have a really good excuse because I have been busy, busy, and more busy! Most of my last month has been spent getting ready for my first mountaineering trip out to the Cascade Mountain range in the Pacific Northwest; namely Oregon and Washington. My brother in-law Robert and his friend Paul planned a trip to attempt summits of 3 separate peaks in the 9 days we had in the region. To give you the short and skinny, we only made summit to one :*(

Reasons: first attempt up Mt. Hood, was blunted by hard driving cross-face snow chilling us as well as taking our vision away beyond 30 feet in front of us; first and only attempt up Mt. Rainer (the grand daddy! and tallest peak in the Cascades) was halted a quarter-way into the morning of day 2 by constant snow all day the previous day and the conversion to rain in the night - which slowly was causing our snow cave to collapse, and thus freaking me out a bit. I'm not necessarily claustrophobic but I definitely wasn't comfortable with at least a foot of snow above me and the sounds of avalanches off in the distance above us in elevation on the mountain. Avalanches really do sound like a train coming, kind of funny in a non-humorous way to experience! So since avalanches would make it unsafe for further climbing upward, we decided at around 3 or so in the morning to pack up what we had packed in our packs and make trail for the van. Slept the remainder of the morning in the van until around 6 or so when we made the drive back out of Mt. Rainer National Park and to a Denny's! Thank goodness for 24 hour food service. I won't lie, we had some funny early morning, lack of sleep laughs at Denny's; some of which may not be suited to be discussed on this blog. haha. :)

Let's see...second attempt up Mt. Hood was successful! *(at least for Rob and I). Michael, the 4th member of our party, who is a good friend of Rob and Paul and who's father taught Paul and Rob pretty much everything they know about mountaineering also in turn taught me some things...yay. Anyways, we started off after sleeping in the parking lot either in the van or by the shelter, up the mountain at around 2 am. Michael started with us as well but turned around after about 10 minutes of hiking upwards because of difficulties with breathing due to his recently acquired acute sickness (which I eventually got and am just getting over now!). Fairly uneventful hike up the mountain...very quiet and the light from a half-moon was sufficient to light our way. I definitely prefer climbing/hiking in a calm evening/early morning vs. a blazing sunshiney day. Stops were made every 40-60 minutes either for clothing additions or subtractions, urination, or nutrition until we got to about 9,000+ feet, at which point the glacier started and crampons on boots happened! After said happening of cramponing-up, we came across a climber who had got hit by some chauce from above on the ice cliffs and managed to crampon herself in the leg somewhere in the series of being hit and falling a short distance; or something of that sort. Anywho, Robert, being Doctor Duty, rendered the climber and her friends with some first-aid assistance. Additionally, he helped fashion a foot harness for her to hold her legs up so sliding or "glacading" down the mountain would be a bit easier. After the short medical stop, Paul, Rob, and I continued up to what is known as the Hog's Back (picture in the upper left corner of the blog post). At said point, Paul was feeling severely dehydrated after lugging his 250 pound self and 40 or so pound pack up thus far, so he rested with us for a while on the Hogs Back (which is what we are doing in the picture...resting) and then proceeded to work his way down the mountain to safety and euhyrdration. At which point, Rob and I continued our trek onwards and upwards! I was a little bit nervous b/c the Hog's Back was definitively a razor-like edge that allowed little traversing except for with well-placed cramponed steps or in existing tracks the people before us had left. After reaching the top of the Back, we traversed left to approach the 'shooting gallery' as we referred to it as, because of the falling chauce and ice from climbers above. Are you loving the play-by-play yet? Anyways, steep-ish 60 degree or more of upward slope climbing and we made the top of the ridge, which was a razor edge as well with a thousand foot plunge down the other side of the mountain! Another 2 or so minutes of simple hiking to our right along the razor edge and we were on the summit! Summit time was approximately 9:20am. So a little over 7 hours of climbing/mountaineering/etc. to reach the top. Had there been less people perhaps we would of made it in faster time. A weekend with great weather made for a popular place on the mountain that day.

Our final story of a mountain for the trip was to be Mt. Jefferson. In between the attempts on the 1st two mountains, we stayed in Portland (for the Hood attempts) at Rob's friend from medical school Nicole's pad, and at McChord Airforce Base, in Washington because of Paul's job in the airforce. So anyways the Jefferson story...

Planned to hike into what is known as a base area called Jefferson Park the night before a summit attempt. Driving up to the trail head we were halted by deep snow on the road and were forced to park approximately 2 miles from the trail head and post-holed (hiking in snow while subsequently punching through it up to your ankles and often half-way up your calves) our way up to the trail head in shorts and tee shirts! It was a good 60 some degrees but the snow was stubborn and a few weeks off from melting completely. Arrived at the trail head after an hour and half trek upwards. Discovered shortly after that trail to Jefferson Park was not marked at all and our topo map only showed us following a creek. Furthermore, our trail was snow covered and required more post-holing to make any progress. After about a half hour, we decided a summit was g0ing to be impossible b/c the snow was too deep and our arrival was a few weeks early for the season. Also, J. Park was another 5 miles and the sun was starting it's decent to the horizon; so with a smiling disappointment, we made way back to the trail head for a night of camping, food, and fun campfire (our first of the trip!) stories, before tucking all 4 of us into a mega-mit (tent-like structure with no floor, designed to be set up/torn down quickly). The next morning found us hiking back the 2 miles to the car in 45 minutes and then back to Portland evenutally for our final evening together as a group. Tears :_(

Dinner that night was awesome and came thanks to a restaraunt called Henry's in downtown Portland. If you are ever there, do yourself a huge favor and check it out. Amazing food, huge, HUGE beer list :)

Okay so that's my story. Not much else to add, and I've been typing a shit-ton.

Final story while I'm blogging to update those that haven't spoken to me or heard from me in 23 some days since the last post.

Ran the 2nd annual Sage Burner 25k Trail Run here in Gunnison yesterday! There was a 50k version of it too, but I was not feeling up to attempting 31.8 miles of trail running, the 16.2 was plenty for me; especially considering the furtherest I've ever ran in a day was 6 miles! Had a fun time doing it, despite having tired and sore legs later last night and today; T-storms and showers held off and the temperature was nice. I'm proud to say I finished 46th out of 114 entrants for the 25k! Not too bad for my first ever race. I look to do more in the near future. Oh, my final time for 16.2 miles (approx. 25km) was 2 hours 52 minutes and some seconds.

Hope things are well with ya'll. Sorry for the long over-due post. Easier sometimes to save up all the big things to talk about. Keep on keeping on...love ya'll!

P.S. check out all my photos from the trip at my website for pictures!!!! (http://picasaweb.google.com/aldsmith3)
at 10:27 PM
Email ThisBlogThis!Share to TwitterShare to FacebookShare to Pinterest
Labels: Mountain Climbing, On the Road, Pretty Pictures