Writing about this, finally exposing the mental havoc I subjected myself to after my motorcycle accident, is what brings release. In this, I seek to help others talk about their challenges, regardless of the seriousness, and to commit to a path of change and growth in life - not settling for excuses as to 'why not'.

I had survived the physical altercation with the pavement and my body was going to heal fine. The mental battle, though, would be a long and seemingly infinite process - still in the later stages today - nearly 5 and a half years later.

I recall bits and pieces of the month or so directly after my accident, where the downs were as low as they had ever been in my young life. I quickly deteriorated into a depressed and gloomy young man. My relationship with a girlfriend at the time, Ashley, had been on and off again at this point previous to the accident, and the terminal news that would break the camel's back arrived in a hand-written letter: we were done; over; finished. Given my current state of emotional delicateness, I was easily and silently crushed.

I can recall sitting at the kitchen table reading the letter while my mother worked nearby. I had no words to express my hurt. My family loved me, but in this time and space, I was suffering and didn't know how to express my mental darkness and declining light.

Since it seemed that my fractured clavicle limited everything I did, I came to rely on my mother or father to help me shower and dress. Never before had I experienced such debilitation and reliance on others as a result of a broken bone. I could not exercise in any way that was meaningful to me besides walking - which in the early days - given my soreness, swelling, and road rash - was nearly impossible without pain and discomfort. I let this loss of physical expression consume me. I retreated even further into my light-less and selfish shell. I can recall going for drives in the little blue 1990 Honda hatchback 4-speed I drove. Relying solely on my left hand to reach across my body to shift and steer as I listened to music that soothed and stroked my dark mood. It was in the music, however, that sympathy and release transpired despite the hole I found myself in.  This was my outlet: driving on back county roads near home stumbling through a depressive disorder that had intentions of ending me.

It was in this space that I became companions with misery. I surely was acting differently around my family but perhaps they did not notice. I do recall my sister Erica calling me one day while I was out driving alone. I was having a flared and very depressive afternoon in gloomy, western Pennsylvania. Thoughts of suicide were within my head and psyche, though not a method or plan to follow through with. It was 1 of a handful of times that I can recall being on the verge of wanting it to all be over, though Erica's call, in this instance is something that helped shine light in the seemingly vast darkness.

The conversation was nothing short of my sister being concerned about me. Perhaps, though, she could read from the distance of her home in Illinois that I was not myself. This care from afar gave me a nugget of advantage over my dark, depressed self. I now had something worth living for. (Granted I realize now how narrow and limited my scope was, but at the age of 21 I could not see my need to reconsider the unknown of life; to expand outside my selfish self). After that phone call, it was decided:

I could not kill myself, no matter the psychological pain; I loved my family too much to put them through that.

This point onward is where I started to shift; but, perhaps I was not quite shifting, but recreating a new life and/or personality into which I could live-on through. In this I sought to push through the spots of darkness that still frequently visited me - without prior warning. I would wake up on any given day, and something unknown could trip me off into having a depressive, bi-polar day; even if my morning or afternoon had been happy and cheery initially. At this point I probably should have sought counseling, or even attempted to tell my family that I was struggling. I did not; I could not.

In choosing to fight the mental battle alone, I set in motion a commitment to change unbeknownst to me at that time, to overcome the mental angst that had engulfed and shaded my life away from light and fullness in life.

I easily recall the mental battles where I was balancing the greater will to live with the lesser will to perish. I can recall txting my friend Ryan Halliwell with tears forming in my eyes, telling him I was struggling, and that I thought about killing myself. It had come to a head multiple times, but I still did not seek help or counseling because I had the desire to live; the desire to push on and not end the struggle.

This is where I reconsider the past through the present lens. I struggled, and still do occasionally; though, now I understand where I have come from and why life will present moments of difficulty. I do not wish to revisit the dark spots, and in many ways I couldn't if I tried. I have never been so low as I was that month or so back in 2006.

I think about my mother who fought through not one, but 2 major surgeries to remove tumors: one back and spinal tumor, one brain tumor. If she could fight through and not lose the will for life, then certainly I could too. I am my mother's son, and I possess the will for life to its fullest expression!

I still am making sense of my life from 5 and half years ago, though I am in no rush. Much has been revealed to me in spaces where I am patient to receive. I do not wish that I had sought counseling, though I do wish I would have been more caring and responsible and less selfish with the relationships I found myself in...and out of. I feel much of my searching for the next thing (whether that was relationships, or self-development) is a result of my accident and the psychological shift that followed. The intermix of being young and in need of development with a traumatic event has brought me to this time and space - full of mistakes - with scars to show and share. Lessons have been learned and oft I must revisit why I needed to learn. The hard way was not the smart way. I admit now that it was the path I choose by default when I decided to take risks in life.

I hope, in all the passiveness that that word encompasses, that you find the relation between my life and struggles with the point(s) in your life that have challenged you. We will continually be tested to see if we are worthy of staying on this Earthly plane. Seek to grow outside yourself as I do now. While we have many issues within ourselves, we also have a lot of commonality to share about those struggles that can and will help us to address the larger, worldly issues.

We, and our struggles, are but a small fracticle among the larger challenging pieces circulating the conscious minds of humans. Seek the battle within to become who you intend to be, so that you may share your light with the world! We all need more people like this.

Love in life and thankfulness in mistakes to guide us,
Alan 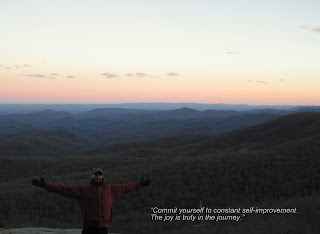 "Spiral out, keep going!"
at 6:50 PM
Email ThisBlogThis!Share to TwitterShare to FacebookShare to Pinterest

I've learned how much you've changed in a positive direction since that time and space, inside and out, and it makes me think, 'everything happens for a reason'. Where would you be had you not made that mistake? In retrospect do you regret it? and if you don't regret it, is it still called a mistake?

Thank you for sharing and thank you for coming back to yourself in your own time, by your own desire, and I love you heaps

Thank you Maura dear. I do not regret what has happened to me. I needed to suffer some damage in order to grow outside of myself. Such is still the case now, though the damage part is less physical and more reminder-type of things (i.e., the way life hands me beat downs, just when I needed them to remind me how small I am in the world).

You pose an interesting question: if I don't regret it, is it still called a mistake? Hmmm...perhaps the vernacular changes but it is still something that I don't regret.